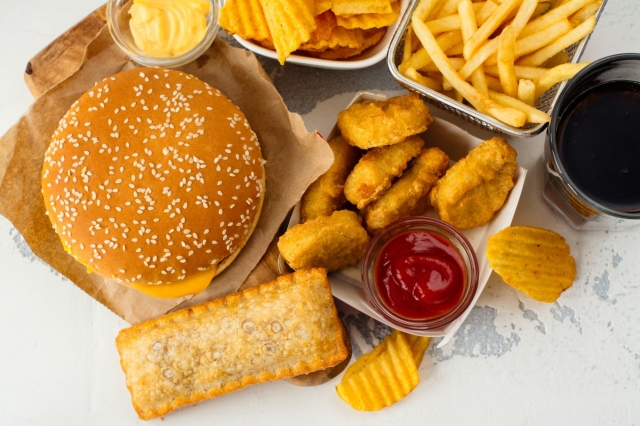 In Part 1 of this 2-part blog series, I discussed ten foods that support optimal brain function. In this blog, I’ll cover four types of foods you’ll want to avoid to promote the health of your most precious asset, your brain.

Sugar-sweetened beverages, including soda and fruit juice, don’t do the brain any favors! The consumption of sugar-sweetened beverages (SSBs) is associated with ADHD in children, an increased risk of stroke and dementia in adults, impaired memory and learning, and aggression. (3, 4, 5, 6) Maternal consumption of sugar-sweetened beverages during pregnancy may reduce childhood cognitive scores in offspring; a high intake of sugar during childhood may further impair cognition. (7) Finally, a high intake of dietary sugars promotes the formation of advanced glycation end products (AGE), compounds that damage many organs in the body, including the brain. In fact, AGE production may contribute to the development of neurodegenerative diseases such as Alzheimer’s disease. (8)

Trans fats are a type of unsaturated fat produced during food processing and are associated with an increased risk of cardiovascular disease and diabetes. More recent research indicates that trans fats also harm the brain. The consumption of trans fats causes a chain of oxidative damage in the brain that leads to impaired memory, irritability, and aggression. (9, 10) Some of the most common sources of trans fats in the average diet include baked goods (cakes, cookies, pies), breakfast sandwiches, margarine, microwave popcorn, doughnuts, fried fast foods, and frozen pizza.

While seafood is generally great for the brain due to its high omega-3 fatty acid content, I recommend avoiding seafood that is high in mercury because mercury has neurotoxic effects. Prenatal exposure to mercury is associated with impaired cognitive performance in childhood. Environmental mercury, from sources such as high-mercury seafood, dental amalgams, and industrial pollution, likely plays a role in the development of Alzheimer’s and other neurodegenerative diseases. (11, 12)

To select seafood that is low in mercury, I recommend you use EWG’s Consumer’s Guide to Seafood. Wild Alaskan Salmon, sardines, mussels, rainbow trout, and Atlantic mackerel are the highest-rated seafood by EWG due to their high omega-3 content, low mercury content, and sustainability.

Now, I’d like to hear from you! Do you eat to support your brain health? Would you consider trying some of the brain-boosting foods I’ve discussed in this article! If you have any questions, please feel free to reach out to me here at The Pratt Clinics.