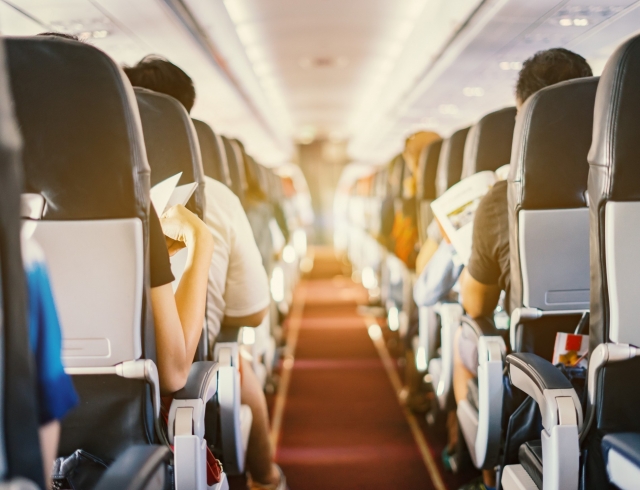 We all know that travel is fun and exciting, but it can be stressful on the body. Hours spent in cramped airplanes, questionable food, and disrupted sleep schedules all take their toll on your health and can detract from the quality of your travel experience. Taking care of your health while you travel can make your experience far more enjoyable. In this blog, I’ll cover eight strategies for staying healthy while traveling, so you can enjoy your experience to the fullest!

Combat the stress of airplane travel

Airplanes make travel comfortable, speedy, and efficient, allowing us to travel nearly anywhere our hearts desire. However, airplane travel also comes with some significant drawbacks. Between the circadian rhythm disruption that occurs from rapidly crossing multiple time zones, the radiation emitted by TSA body scanners, and the unhealthy recirculating in airplane cabins, plane travel is hard on the body.

Every day, TSA screens approximately 2.1 million passengers and crew at airports across the country. (1) Most of these passengers are screened using a full-body scanner. Half of these scanners use millimeter wave scanning, a form of non-ionizing radiation, while the other half of scanners use backscatter x-ray, a form of ionizing radiation. (2) While very few people stop to consider the health effects of these scanners (perhaps due to government claims that these scanners are “completely safe”), I’m here to tell you that they are not harmless.

Millimeter wave scanning technology extremely high frequency (EHF) radiation, a form of radiation that has been found to damage DNA in scientific studies. The ionizing radiation emitted from backscatter x-ray body scanners is known to break chemical bonds in molecules and to be carcinogenic even in tiny doses. Furthermore, the TSA may not be telling the truth about the amount of radiation delivered per body scan.

To avoid body scanner radiation at airports, you have two choices. The first choice is to opt out of the full body scan, meaning a TSA agent will pat you down instead of having you go through the scanner. However, this can require a lot of extra time, as TSA agents typically aren’t in a rush to help travelers who opt out of the scan. Furthermore, many airports are considering eliminating the “opt out” option. Your second choice is to apply for TSA Precheck. The TSA Precheck process involves getting a background check and, if approved, a special identification number that allows you to bypass the extensive screening process for a quick walk through a metal detector. You can learn more about TSA Precheck here:

I personally use to opt for the pat-down each time I flew, but finally got TSA Precheck this past summer. It has made my airport experience a lot more convenient, and likely a lot safer due to the decreased radiation exposure!

However, radiation exposure doesn’t end at the TSA checkpoint; we are also exposed to radiation on the airplane itself because flying brings us closer to cosmic rays from the sun with less protection from the atmosphere. In fact, radiation is considered an occupational hazard for pilots and flight crew, with pilots demonstrating increased chromosomal damage and risks of cancer. If your flight offers Wifi, then you are also being exposed to man-made EMFs throughout your flight; to learn more about the harmful effects of man-made EMFs, please see my blog series on EMFs. Click these links to read Part 1, Part 2, Part 3, and Part 4.

How to mitigate the harmful effects of air travel radiation

What can you do to protect yourself from the harmful effects of the ionizing and non-ionizing radiation that comes along with plane travel?

The first strategy I recommend is to eat a diet that is especially rich in antioxidants prior to traveling. Dietary antioxidants, such as vitamins C and E, scavenge free radicals produced in the body in response to radiation. Astaxanthin, an antioxidant found in some microalgae, krill, and wild salmon that has a vivid orange hue, protects against ionizing radiation by inhibiting free radical production. (3) Interestingly, astaxanthin is 64 times more powerful than vitamin C and 14 times more powerful than vitamin E as an antioxidant! Chlorophyll, a compound found in green leafy vegetables, spirulina, and chlorella, also has antioxidant properties, protects against radiation, and even removes toxins from the body.

It goes without saying that airplane food is basically the epitome of unhealthy food. It is frequently highly-processed and laden with refined sugars and industrial seed oils. To further protect your body against air travel radiation, avoid eating airplane food because it will only trigger more oxidative stress and further deplete your antioxidant reserves.

Another way to reduce your exposure to radiation during travel is to fly at night. Flying at night significantly reduces radiation exposure because most of the sun’s cosmic rays are being blocked by the earth. (4)

When we rapidly transition across multiple time zones over the course of an airplane flight, an asynchrony between the local time and our internal circadian rhythms is produced. This results in circadian rhythm disruption, more commonly referred to as “jet lag.” While jet lag is most often associated with sleep difficulties, it also affects the digestive system and brain, causing our bowel habits to take a turn for the worse and impairing our cognition. Fortunately, there are several steps you can take to combat the circadian rhythm disruption associated with air travel.

Airplane air is notoriously dirty. Research indicates that it is contaminated with vapors from engine fluids, hydraulic fluids, and de-icing fluid; inhalation of these vapors by pilots, flight crew, and frequent flyers is linked to neurological, neurobehavioral, and respiratory symptoms. (5) Airplane air also contains airborne bacteria and viruses that increase your odds of catching a cold or flu. To protect yourself from the dirty air on airplanes, try a small personal air purifying device such as the Air Tamer; it creates a personal bubble of clean air for you and may reduce your chances of getting sick.

If you have any questions, please feel free to reach out to me here at The Pratt Clinics.